Allyship is not an identity; it is a consistent process

Anti-Racism isn’t linear or binary. It requires consistency, work, and introspection. The term ‘ally’ is often misinterpreted as a title or identity as opposed to a process. Yes, energy can often waver, but we must understand that there is no simplicity or completion in the battle against racism. This is why it is crucial to understand the nuances between reactive and proactive allyship in order to make long-lasting systemic change.

Reactive allyship is usually a fast response to something that a person is affected by at that moment. This usually means that once that conversation, event or incident is over, that individual will move on quickly. It can also show that you are reacting in a way that makes you look like you’re doing the work but in essence, you’re not doing anything at all. It is therefore performative.

Fear and guilt are often the drivers of reactive allyship, and whilst these are normal responses, they are not productive. Instead of learning and growing, fear and guilt centralise whiteness. For example, the reactionary statements and black squares of 2020 provoked a conversation about BLM, but the work often ended there. A lot of people posted a black square on their social media channels and have done nothing ever since. For others, the black square was a way to feel like they have done their part without the consistent work. As Audre Lorde wrote: “guilt is not a response to anger; it is a response to one’s own actions or lack of action. If it leads to change then it can be useful since it is then no longer guilt but the beginning of knowledge. Yet all too often, guilt […] becomes a device to protect ignorance and the continuation of the way things are, the ultimate protection for changelessness.” Therefore, guilt, and its consequence of stagnancy, works to protect complicity. It operates under the guise of allyship but in reality, it works to preserve the very systems anti-racism seeks to dismantle.

Proactive allyship, on the other hand, doesn’t centralise fear of guilt. Instead, it recognises the necessity of being uncomfortable to learn and grow. Feeling uncomfortable with the reality of your past actions or inactions can often provoke fear, but it is the proactive choice in learning from those mistakes which makes a difference. The journey through anti-racism is not linear, it can often mean making mistakes, but the real change comes in choosing to be consistent in your learning and growth. Being proactive requires planning and strategy along with the action that you follow up on over and over again. This needs to be ingrained into your daily life, just like doing an exercise class or daily reading. Anti-racism work needs to be another element of your day-to-day routine. This could be done by:

Being proactive shifts your allyship from being performative and reactive into becoming a fundamental part of your culture which will then help to give you the tools to influence your sphere.

The fight towards equality and empowerment is a struggle. It cannot solely be the responsibility of the marginalised; it requires those with privileges to contribute. It needs to stay consistent until black lives and spaces are safe, amplified, empowered, and equal. We all have a part to play in this system and it is in every choice we make; we decide whether to be anti-racist or simply non-racist. We must hold ourselves accountable and actually do the work. The work is always moving, and allyship cannot be titled because it is not still. 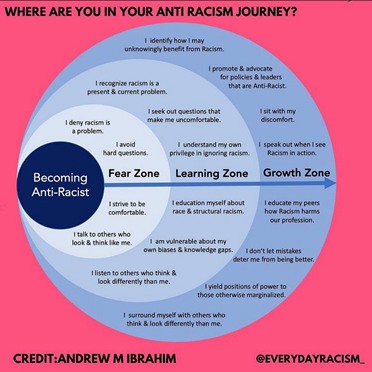 The term ‘ally’ is often misinterpreted as a title or identity as opposed to a process. Yes, energy can often waver, but we must understand that there is no simplicity or completion in the battle against racism.

Having Faith… at the workplace

AI, the future intelligence for learning or more biased than a human?

Collective Responsibility… in our fight against racism

Having Faith… at the workplace